Exposing A Scammer That Threatened To Kill Me

30 Apr Exposing A Scammer That Threatened To Kill Me

Posted at 13:27h in Comedy by Cormac Moore
Share

This encounter with an online scammer, ended with him threatening to kill me. Thankfully I was only a little scared, because he was in the United States and all flights are grounded. For now. But will he hunt me down and make good on his promise after I wasted hours and hours of his time online?! :/

Probably not, but for the sake of the story, a convicted criminal wants me dead.

This is the tale of a particularly interesting scam, how I got the person’s name, visited their home on Google Maps, got a cat involved and pissed them to the point where they want to get violent.

So, let’s break down how this all happened…

(BTW, because of the screen shots, best viewed on a desktop, or turn your phone landscape.) 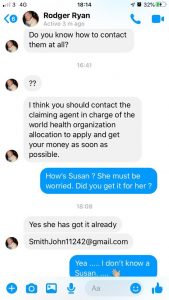 So, the first step in the process was Facebook. My Fiance got a private mail of what looked like was her granduncle living in the United States. He does actually live there, but our scammer had cloned his account and re added all his friends online. He then began DM everyone.

Now, what has to be applauded is effort here, because it wasn’t an automated bot, someone was on the other end of the conversation, fishing for a few people he might be able to shaft.

So, the promise was a relief fund from the WHO and all you had to do was email a dodgy looking gmail account. (Hey, maybe the WHO are outsourcing their admin work to people who only have gmail accounts?)

Anyway, the email was sent and I awaited the response.

7 Minutes after sending the very first email to our “WHO agents”, this was the reply:

Cracking response time in fairness, which would put most customer service departments to shame. I liked how they framed it as I may not be eligible for the money and incorporated my surname into it all. Helped me establish more trust with our con artist friends and added some anticipation into the mix too.

Anyway, we got some amazing news:

An email form was sent to fill out, here were my answers:

It was at this point I was thinking they would start to realise that I might have been taking the piss. I had not filled the form out with honest.

Oh and why the name Rainless Goo? Well it’s an anagram of my co hosts name Saoirse Long.

Anyway, these guys are pros and were making sure all the info I had provided them was and so needed some photo ID to make sure all was in order:

I left it a day before replying. Two can play the teasing game and then I sent them this: 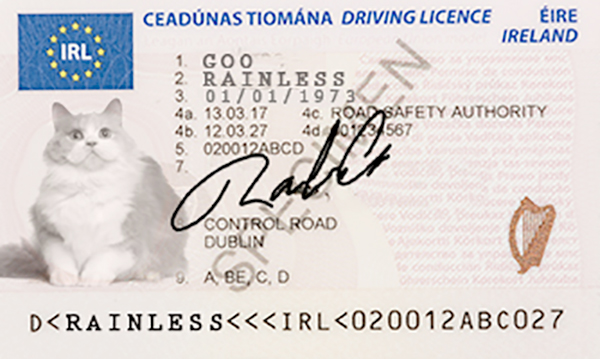 Now in case you do not know, I am not a cat. Nor can they drive. So you would think that most people seeing a cat photoshopped onto a driving license, no matter what the country its from, would raise a red flag.

Here is their response:

WOULD YOU BELIEVE IT I’M GOING TO BE RICH!

Their system approved a driver’s license with a cat on it. Magic.

It was about 50 emails in before they had asked me for money. I’ve never been scammed so respectfully before in my life. So many scammers don’t give you the time or effort and are just after one thing. These guys were different. Bless them. Here were my options: 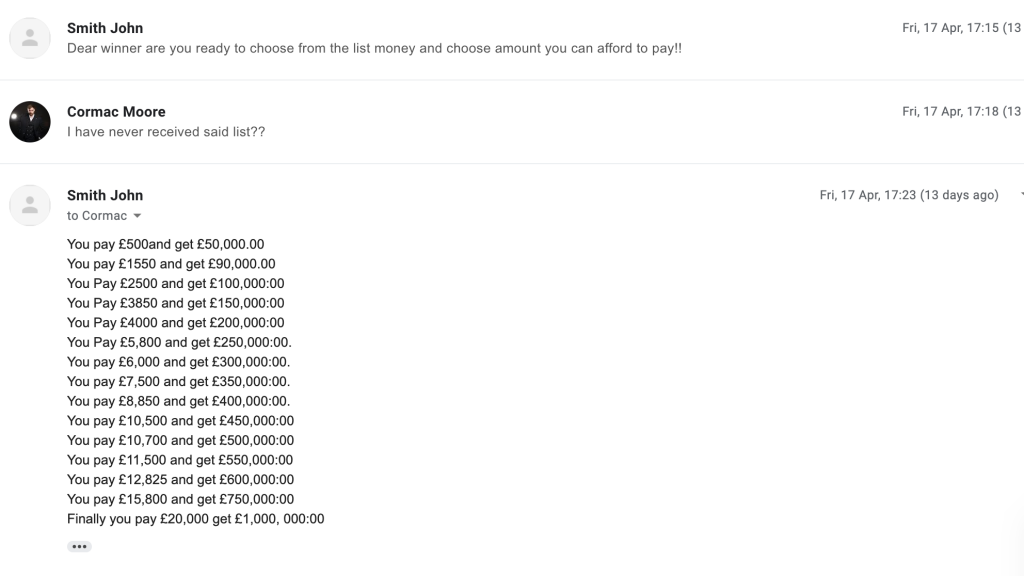 I wanted to max this out, so opted to pay the £20k and bag myself a handy million. I got a name and an address to make the payment to, either via Moneygram or Western Union. I presumed both the name and address were fake.

I’ve blanked out the full address, but I went for a quick stroll on Google Maps. Here is the actual house: 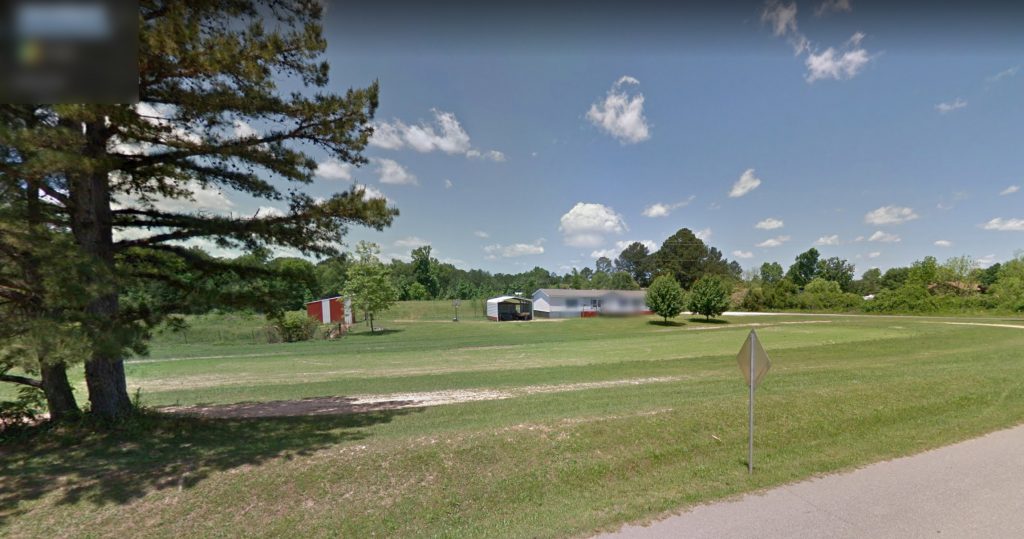 And it turns out that our Stephen friend actually lives at this address, which is in Brookwood, Alabama. And he is a convicted criminal. (Again blanked out his full name.) Here’s a list of his charges after I searched him online: So, I have to send money to the person who lives at this address and that person is a convicted criminal. There is also a Western Union 11 minutes from his location.

Anyway, here’s what happened next:

Poor Stephen is not allowed use The Western Union anymore. Weird. Anyway, I kindly sent on my receipt with honest:

Turns out, after filling out the form with ’emotional mess’ for our state, after photoshopping a cat called Rainless Goo onto a drivers license they finally copped that I was taking the piss with a hand written receipt together with a stick drawing of myself and the cat.

They were not too happy.

Whoops, now they want me dead. As you can imagine, this was the end of the discussion, but just a heads up if older relatives you have forgotten about get in touch. They might be a bit dodgy. Or you might be a terrible grandchild, either way, pause for thought.