How Was My First Ever Cuddle Party? 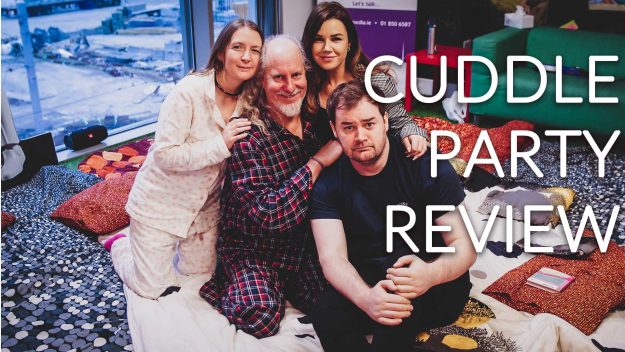 Have you ever wondered what it is like at a cuddle party? No? Fair enough. Did you know they take place all over the world, including on a monthly basis in Ireland? No?

Nor did I. But last week, we finally had our very own cuddle party in FM104, that Saoirse my co-host organised as a xmas present.

And what was it like? Hell. If I’m being brutally honest, I didn’t really enjoy any of it, but in fairness that was Saoirse’s entire point.

As someone who isn’t exactly a fan of affection, cuddles and certainly not hugging other people I don’t know that well, having an event organised where the premise is that you spend 2-3 hours cuddling strangers, wasn’t all that appealing.

The only thing I did enjoy about the entire thing, was the fact that I was free to refuse anyone who wanted a hug. Excellent. The first part of the party, was an hour long cuddle consent class, outlining the 11 rules of cuddle parties.

Why there are so many rules raised a bit of a red flag for me too. What has happened at cuddle parties before, that warranted the need for 11 separate cuddling commandments?! Hmmmm.

Rule number 1, always keep your clothes on. Now personally, I would have presumed that one was a given, but no. People in the past have needed clear instructions to keep their clothes on. Right so.

The entire time Randy, our cuddle party organiser, reinforced the message that cuddle parties were not sexual or intimate in anyway. However, the constant stress and even multiple mentions of the phrase “not sexual” made me slightly uneasy. Add back in rule number 1 and I’m just a bit, confused maybe.

Randy is a certified cuddle party instructor. And also mentioned that he is a sexological bodyworker. I’ve no idea what that is. And I’ve know idea why that needed to be mentioned at a cuddle party. A cuddle party that was not sexual. At all.

Other rules surrounding consent were explained and frankly quite useful. Clearly outlining the steps needed for consent, allowing people their strict boundaries and clarifying that a “maybe” should always be treated as a no. Great stuff.

The Rules Of Cuddle Parties:

Remember, I’m doing this with a group of people we grabbed from the sales office, because everyone else who said they’d take part didn’t.

There were a few other ones and we ended with a group exercise where people could ask you anything and you had to answer yes to it. Nothing happened after you answered, but if someone asked you could they stroke your nipples, you had to say yes. This was meant to be a bit of fun, but it was just, fucking weird.

And part of me wondered, why does someone want to get you used to saying yes to things you’re not comfortable doing? So people can learn to say yes and say no? So people can learn from your body language when you might say yes, but you really mean no? Or something else?

Thankfully due to the lack of numbers that came to the party, it did not go on for the 3.5 hours we thought it would. It ended with “free form cuddling” where I cuddled a total of 0 people. Success. I tried to go for a little nap, because in fairness, having a floor covered in blankets and pillows in an office might not be a bad idea.

If cuddles are your thing, great, go for it. But if you’re like me and wouldn’t be the biggest fan, this probably isn’t for you.

‹ RECIPE: How To Make A Banana For Breakfast